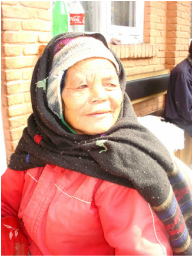 Our Vision:  to improve the socioeconomic status of socially discarded people of the country by providing social support and raising the level of income through handicraft.

Our Mission: to achieve sustainability of New SADLE through establishing a reputed sustainable income generating handicraft business in order to rehabilitate and establish socially discarded and marginalized men and women by providing them social support and employment opportunity.

Objectives:
What Do we Do?
Our prime objectives are to cure leprosy affected people, particularly beggars, and rehabilitate those cured leprosy cases as well as polio affected, other disabled persons and destitute people including under privileged people of Nepal.


We also look after old aged people who have nowhere and no one to turn to by providing medical services, food, accommodation and necessary clothing.

Beneficiaries Background
Rudra Maya Magar was born some 67 years ago in Ramechhap district of Nepal. Her father, also a leprosy patient, died before she could even know him and her mother passed away when she was only nine years old.


In her search for a caregiver, she roamed around the villages looking for her distant relatives. Her fate was cursed with a huge blow once again when she was infected with leprosy at the age of eleven.
​In spite of her leprosy, she somehow continued to survive within society until her deformities made her a social outcast at a very young age. The cruelty of fate never stopped striking her; in the past two years she has lost her eyesight as well.

When she was seventeen, Rudra came back to the village where she was born in search of shelter. She was given shelter by her distant relatives in a nearby stiff cliff where she lived until rescued with the help of locals and New SADLE. She had spent fifty years in the cliff and had spent many days and nights without either food or sleep. During this time no one visited her, no one touched her- she was completely on her own.

When she arrived at the Kathmandu airport, Rudra was touched by another person for the first time in half a century; she could never believe that such a thing could have happened in her lifetime. She was received at New SADLE with joy and checked by a medical officer who confirmed that she could see again after an operation. She was over the moon when she heard that she could see the things once again and see the newly found home. Rudra has been living at New SADLE ever since.